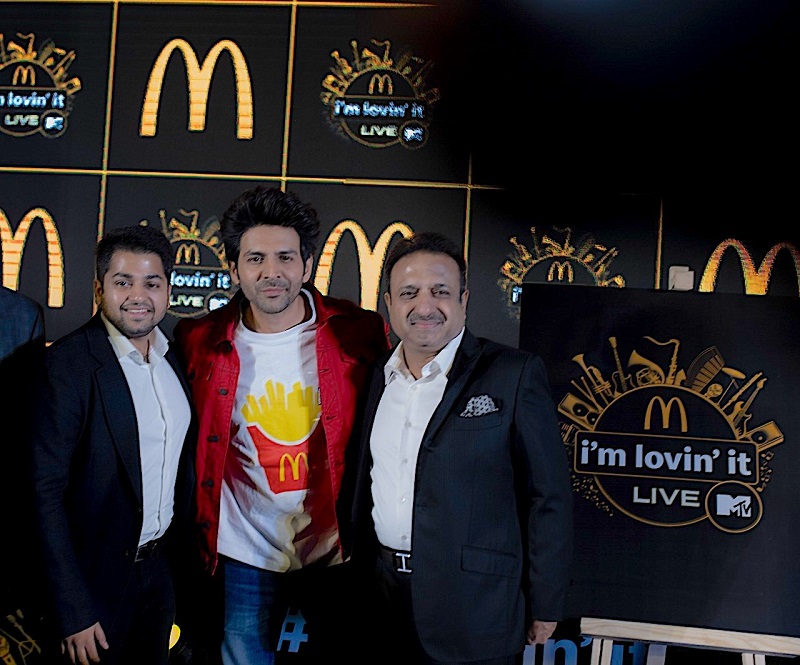 “McDonald’s has been my Bachpan Ka pyaar and It is an honor for me to be part of this family and to be at this event”, said Kartik Aaryan, megastar, who was seen beaming with joy as he unveiled, I’m Lovin’ it Live, the brand’s global music IP by McDonald’s India – North and East, in association with MTV. With #IamLovinit experience, Kartik Aaryan and Armaan Malik set the tone for a musical extravaganza.

It has been like a distant dream to be able to enjoy live concerts during this pandemic time, and thanks to this concert, it looks as if we will once again be able to enjoy live concerts during this period and live concerts are going to return to the mainstream with the launch of i’m lovin’ it Live in India. It is hoped that the event will bring together lovers of both food and music, allowing them to have a memorable experience, and share their passion for music. As Kartik danced along to the ‘Hare Ram Hare Krishna’ song during the evening’s launch event, there was a frenzy among the girls, and the mood remained upbeat throughout, and the air was tinged with excitement and jubilation.

There will be an electrifying performance by Harrdy Sandhu & Shalmali Kholgade as the curtain raiser on 22 December 2022. There will be six original compositions and music videos that will air on MTV beginning January 2023, featuring Guru Randhawa, Armaan Malik, Arjun Kanungo, Shalmali Kholgade & OAFF, who will work together to create original compositions and music videos.

Excited about the launch of i’m lovin’ it Live, Armaan Malik, said, “Music artists display their emotions through music and performance and our fans can feel, sense and connect with that. And with this opportunity that has been offered by McDonald’s and MTV I will be able to re-connect with my most cherished memories.

A post shared by HIGH ON PERSONA MAGAZINE (@highonpersonamagazine)

During a conversation with High on Persona, Sanjeev Agrawal, Chairman of McDonald’s India – North and East, explained how the purpose of this event is to nourish, unite, and develop communities and transcend barriers with the help of music and he also agreed that this will strengthen their relationship with their customers as well. There is no doubt that he was excited and upbeat about the event, and he believes that it will remain one of the greatest moments in the history of music for the rest of the year, thanks to the collaboration between the brand and MTV.

Five Reasons Why Frozen Foods are a Blessing in Winters!
Bhavya Gaind December 17, 2022