The city of Lucknow, also known as the land of Nawabs, is known for its art, music, literature, and food in particular. Lucknow offers an authentic Awadhi experience that cannot be matched anywhere else, and Radisson Jaipur City Center’s Great Kebab Factory has hosted this distinctly Awadhi food festival titled ‘Nawab-se-Awadh tak’ that will cater to vivid palates with its rich preparation and distinct aroma as well as a specially curated buffet menu. It has been credited to Chef Irshad Ahmed Qureshi for hosting this event, which is scheduled to last until November 30.

Originally from the city of Nawab, Chef Qureshi brings with him the nuances of Awadhi cuisine that are usually overlooked when it comes to Awadhi cuisine. As a celebrity chef with over 40 years of experience, he has traveled to over 80 countries around the world. In addition to a wide range of experience, chef Qureshi is also known for his skillfully prepared signature dishes, which are a few that he brings to Jaipur.

In addition to the fact that the festival is minutely designed by the chef with his expertise in a wide variety of Awadhi food, the chef has ensured it is in line with the taste of the foodies of the city. In order to give you an idea of some of the dishes he prepared for us, we had galawat kababs, kakori, paneer methi kabab, kutti mirch paneer tikka, tandoori khatte methi mushroom, nawabi seekh, and aloo til ke kabab to name a few.

We have a wide variety of non-vegetarian classics like mutton galouti kabab, tandoori murgh tikka, dudhiya murgh tikka, machil lehsuni tikka, raan ki boti, tali machi, and mutton biryani that are sure to satisfy any taste.

Upon entering the Great Kabab Factory on the first floor, VP Pradippta Biiswaas welcomed me and made me feel comfortable. And before starting my interaction with the celebrity chef, I spoke with Director Culinary Chef Neeraj Kataria, who explained why they decided to curate this festival and what makes it so unique. The chef guided me through the beautifully displayed Awadhi delicacies including paneer shabanam, khumb laziz, chilgoja palak and many more. Considering that winter has arrived, nothing could have been better than Awadhi festival, the love for kababs on a cold winter night is unparalleled.

My personal favorite from the festival

As for my personal favorite from the menu, I would have to say it was the Galawat kebabs that were incredibly soft and melted in the mouth. In addition, the dum biryani, and to satisfy sweet tooth, there was kesar kheer and gulab jamun.

Chef Qureshi, during a candid chat with us, told us that there are endless varieties of kababs to choose from-galawat, boti, shaami, hara bhara keema. Whenever I am in Jaipur, I ensure that my kababs are prepared according to the eating habits of the people here, who like it a tad spicy. However, I ensure that the kababs are made with a delicious blend of spices that make Awadhi cuisine stand out from any other cuisine. Basically, it is all about slow cooking the vegetables or meat so that they can absorb the flavour well.

According to him, he uses a mixture of the usual spices and less known or less used spices, such as ‘pan ki jad’, stone flower, dried ginger, among others, when asked about his secret ingredients. 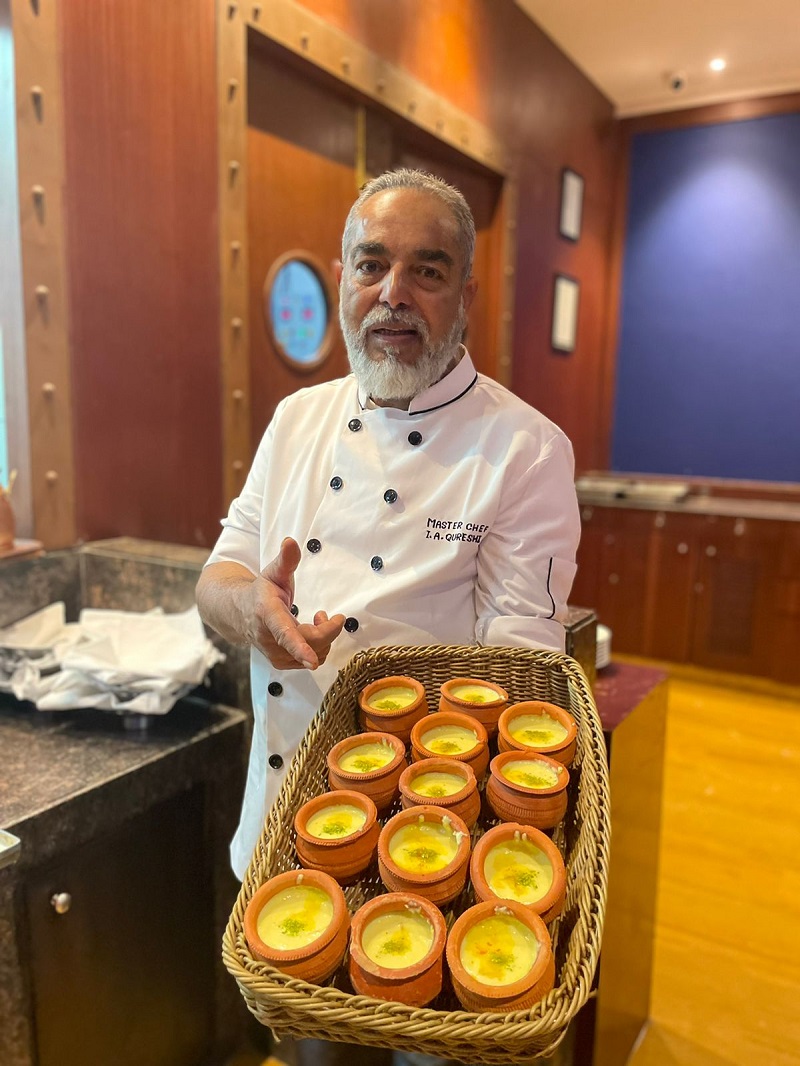 Here are the secrets of the chef’s cuisine

I have attended many Awadhi food festivals, but what makes this festival different is the chef’s secret ingredient and procedure. Chef Qureshi explained that Awadhi food involves slow cooking so vegetables can achieve the desired flavor. “Coming from a family of chefs who had a long association with the nawabs of Lucknow, since childhood I have learned the nuances and intricacies of Awadhi fare and enjoyed cooking it with lots of spices, dry fruits and herbs.”